A while back I heard a show about the rise of methamphetamine in rural America. I didn’t make much of it until this trip. Across all the little towns we visited, signs of meth problems were blatant. While in Salt Lake some advertisement campaigns target meth, they are sporadic and other drugs are also addressed. In rural Montana & Idaho, they’ll paint anti-meth murals on the main town buildings. Meth signs are omnipresent, so are meth users to the more observant eye (not me).

I have to say I was pretty shocked by all this, I did not expect such a widespread and sustained presence. Rural America still has its well known charm but it seems to be struggling against the depravity left behind a drug strained social fabric. 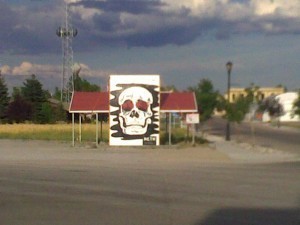 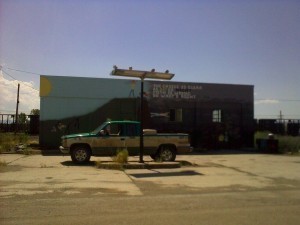 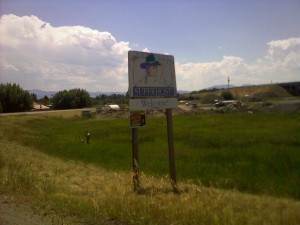 This trip wouldn’t have lived up to it’s reputation without rain, cold & technical difficulties. While I had hoped that the later would not prevent progress, we did have to bring a trailer pretty far north to get Brandon’s bike back to Salt Lake. Upon arriving in Idaho falls we were met by a severe thunderstorm, we decided to spend the night there but the hotel was such a crap hole we said “fuck it” and loaded the second bike on the trailer and drove back to Salt Lake. This is not the return I had expected but we had to get home. And Nicole rocks for bringing the trailer all the way to Idaho Falls and putting up with the major driving that ensued, I’m in serious debt.

The trip was awesome, being back home is amazing, I fell like we’ve been gone for 2 months. I’ve gotten exactly what I wanted to get out of it: a good break outside of my comfort zone and by that token there’s nothing like asphalt moving at 75 mph bellow your feet, wind in your face for hours, camping with wildlife & being far from home.

On a side note, the pictures are lacking because of how hard it is to stop, unwrap & get the camera out every time we saw something noteworthy. Motorcycles aren’t great for photography and I now understand the use of helmet cams. So we mostly have shots of when we stopped for breaks. We have a few more pics on Brandon’s camera that I’ll upload later today.