It’s late November and the ground isn’t frozen, it’s a perfect opportunity to work on water evacuation to the septic tank as we get ready to create our bathroom. If we don’t do it now we’ll have to wait another 4 months. We unearthed the existing line to split it into another one for the bathroom.

It’s still fairly untested at this point but it’s a nice summary of the reasons behind the choices. 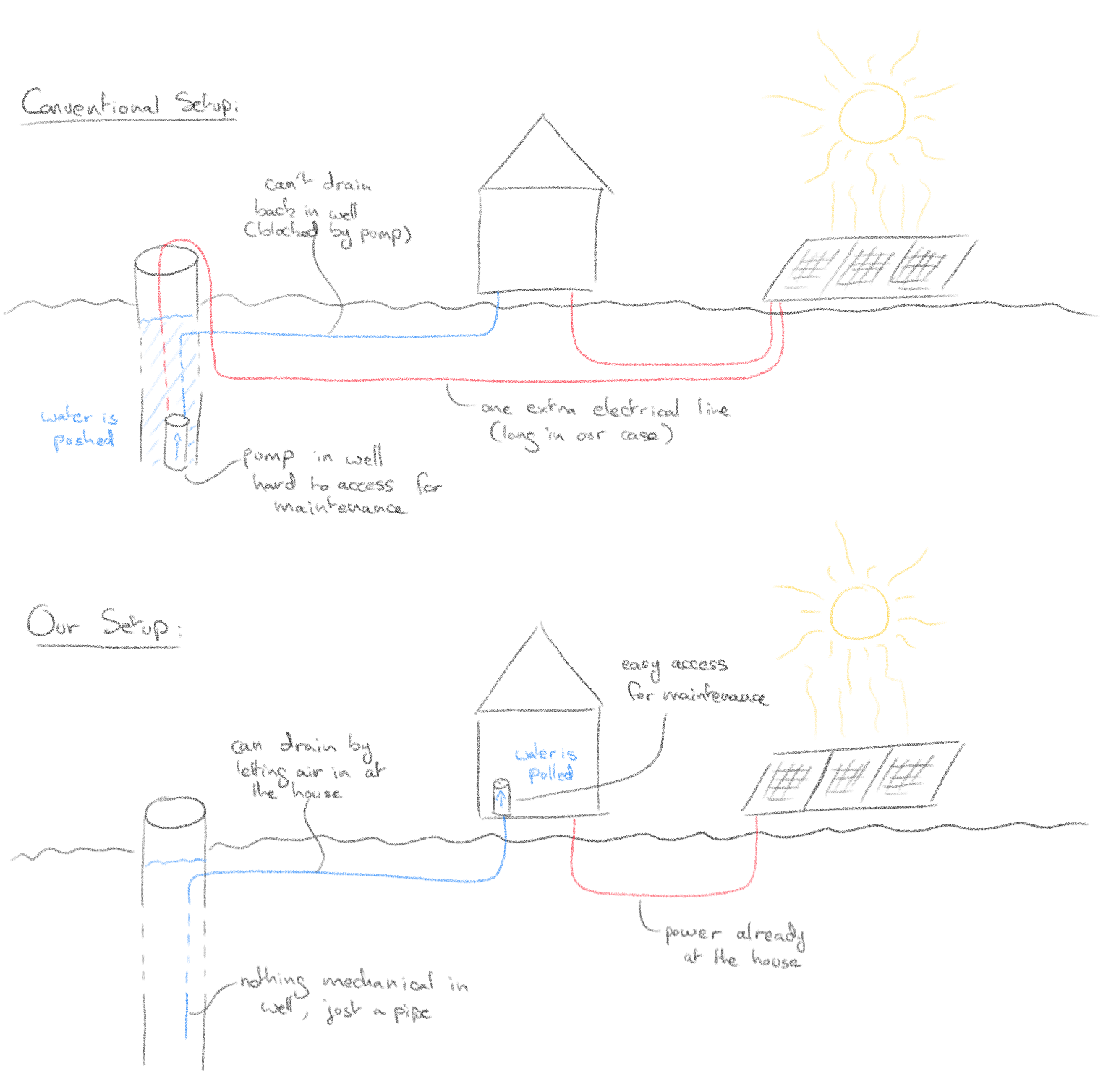 When we drilled our well 4 years ago, we didn’t install an electric pump, only a manual one. We didn’t have power we could spare, we didn’t know how to run power to the well, we didn’t know how to bring water inside the house, the house didn’t even have its final footprint. All these reasons kept us pumping water by hand and carrying it in the house for years. It’s honestly not a bad chore but it does add up with 4 of us taking showers, on top of the drinking and various other uses. If I had to guess, I would say we use about 20 to 30 gallons every day. Now with the Summer stream shower this goes down significantly.

In any case, I made it my mission this Summer to run water inside the house. I tried very hard to have a professional do the work on the well casing, but not a single contractor was interested in the work. As with roofers, they have a ton of work, they get to pick the easy nice paying jobs. I couldn’t even convince them to give me a high quote. I called everyone in the region, and they were honest in saying in a very typically Vermont way that it was just too much trouble to install a pitless adapter. I was very scared to mess up the well and would have been happy to pay someone with expertise to do it, but no one wanted to, so I didn’t have a choice.

I spent months researching it, talking to everyone, watching videos, and replaying in my head the motions for what would need to happen the day of. Until finally I felt like I had turned every stone and just had nothing left to inquire. It was time for action.

One of the complicating factors in this endeavor is the design. Most wells are installed with a pitless adapter under ground and a 110V AC deep well pump in the well itself. That’s what we would have gotten from a contractor and the easy, known to be reliable, choice. However, there are a few things about our situation which don’t necessarily make this the best fit. And so adding to my initial uncertainty about anything touching the well, was the fact that I evaluated designs which aren’t conventional. It’s a bit nerve wracking to question established wisdom having no practical experience on the matter. This is why it took me so long to get to a point where I thought I had it.

Here are the points which held me back from a conventional in-well setup:

Now our well has a very high static level, in fact water oozes out the top a about 4 gallons per hour which required us to create a whole way of disposing of it under ground bellow the frost line so it wouldn’t freeze and damage the well & pump. This seems to be true even today, after a whole month of no rain in Vermont. I cursed my well for having us do all this disposal apparatus for a mere 4 gallons per hour, but the other side of that coin is that it is unaffected by very dry spells when we hear of friends’ wells running dry. I realized that water pumps are rated for how many feet of height they can call water from. A super cheap pump I’ve been moving sap & stream water with can call up to 10′, better more expensive pumps can self-prime up to 20′, anything more than that starts to require specialty pumps. There is just about 10′ between where the well static level is (enforced by the overflow disposal) and where the floor of the house is. Could I have the pump in the house and call the water from the well?

I climbed up a 10′ ladder with the pump to test the assertion and sure enough, it pulls water up just fine. This meant we can have a super cheap pump right inside the house where we can work on it if we need to, with electricity right there. Even better, I can put a simple valve right there to let air in the pipe and all the water will go back into the well, leaving no chance of freezing on the super cold days.

That’s for the somewhat unconventional design, it remained to be seen if all would work in practice. It was time for action.

The backhoe is up for duty again, it has paid for itself many times over this Summer. I had to move the green house away from the well too.

I already have pipes in the ground from the well overflow disposal, and because I dropped the pipe to run in the house then for when I’d need it. I had to be very careful digging.

More work to get there than it looks, a lot is done by hand to not damage the pipes. It’s time to re-do the 10′ height test, the house is also 100′ away from the well, and the pipe a different size so I was ready to think it wouldn’t work.

It didn’t initially work which had me worried, stalled the project for a week as I was bracing for plan B. But I re-did it properly with hose clamps at every coupling and plumber’s tape and it worked like a charm. I will get into how I ran the pipe in the house later.

So with this successful test, I knew I could proceed with the well work. I removed the hand pump and realized I’d need to think about the logistics of moving around it more. I might need someone else, I might need to disassemble it, or I might need some sort of rig to hold it while I work on the rest.

After another week of thinking and preparation, I decided to go for the rig:

I really didn’t want to disassemble it, it just needs to be out of the way enough that I can work in the well. It does weight quite a bit with the 72′ of piping in the well.

Time to make a hole for the pitless adapter

I went in the hole, cleaned up a spot and started drilling. To my surprise, the static is barely above the overflow disposal outlet, and water came out. This meant I did the rest of the work in the mud…

The pitless adapter hole is complete. One of the scarier part of the project.

Time to put the pitless through the hole I just drilled (notice the T shaped metal pull pipe in the grass, I learned you want metal and not plastic for rigidity). Now, because I don’t have a pump sitting at the bottom of my well, I tried to feed the pipe already attached to the pitless adapter.

Then you thread the pull pipe on the pitless and bring it down into the well, where the hole is. I bleached the ever living shit out of anything that touches the well.

Not the easiest operation but not the worst thing I’ve done either.

Inside the well, white is the hand pump pipe, it’s secured with a string. The pull pipe and the pitless adapter further down. 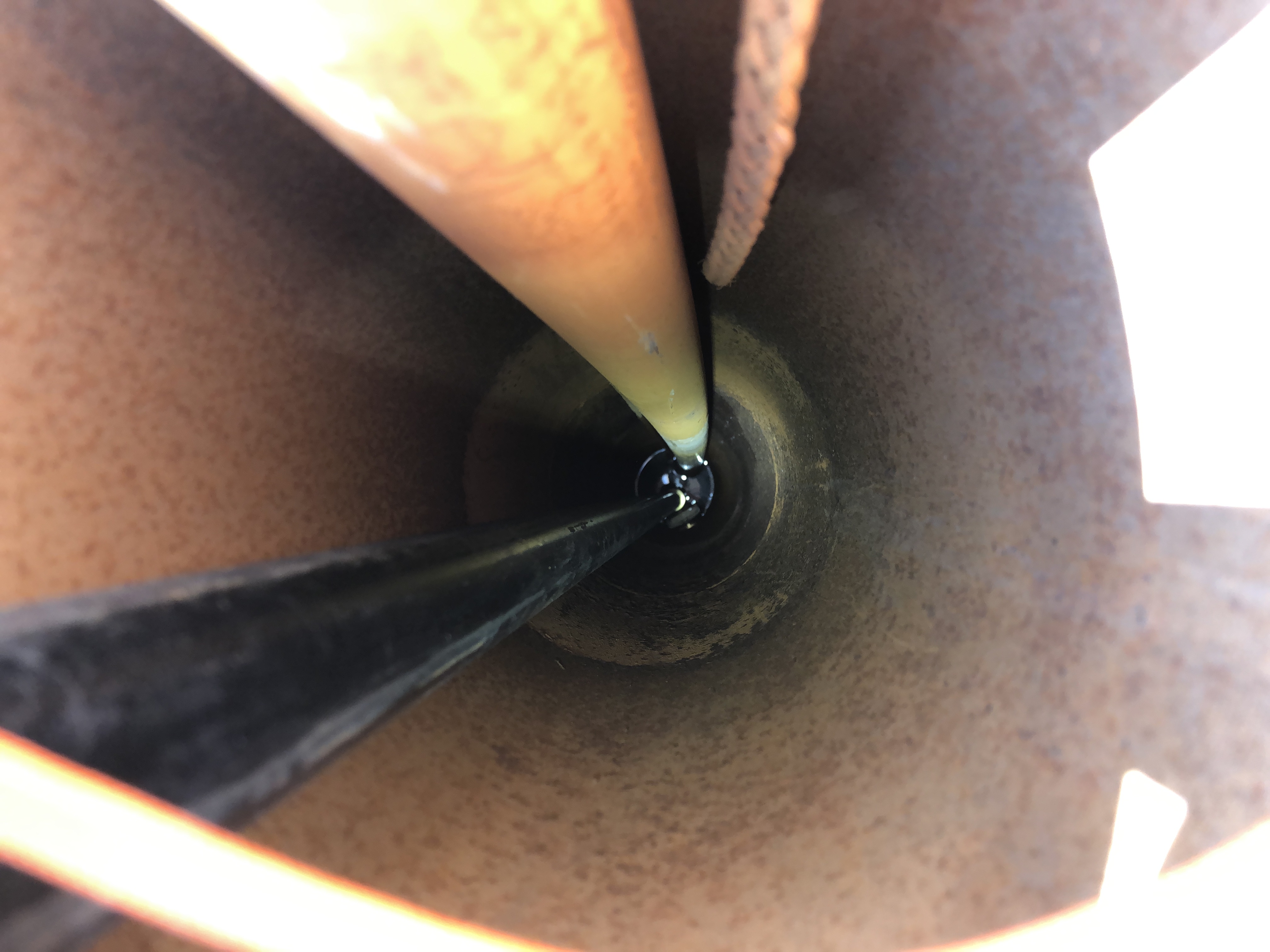 You do NOT want to lose anything in the well.

Outside the casing, this is starting to smell like success.

Which means we can unscrew and remove the pull pipe. Again note that I did this all in one operation because I could get away with it. In a lot of cases, with the pitless secured, it’s now time to separate it and retrieve the section to attach pipes & pumps to. Then you lower it back down in the well. 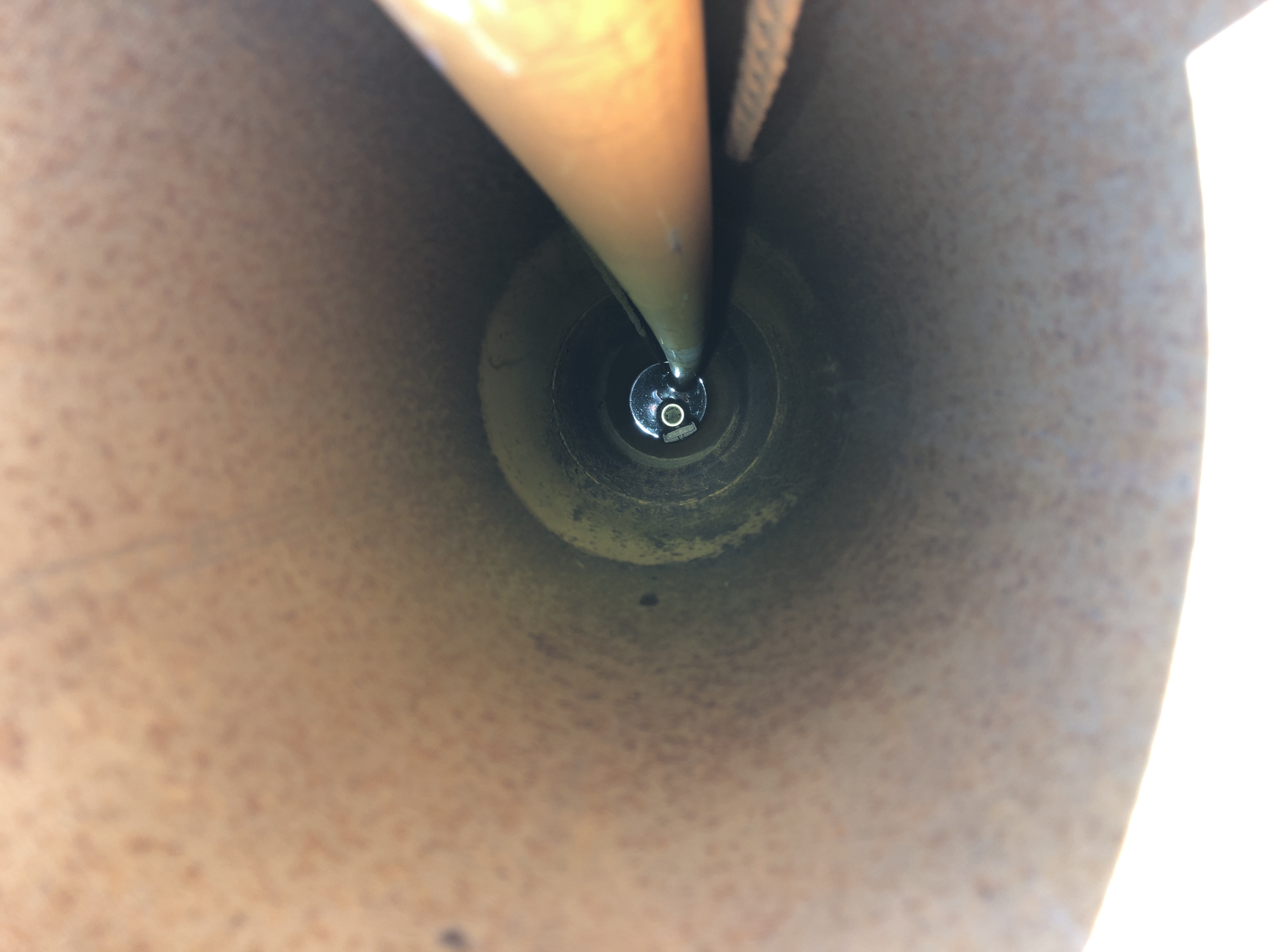 Getting ready to receive the pipe which goes all the way inside the house.

Looks a little funny but it doesn’t matter, and yes I later clamped the coupler.

With all this done, I went back in the house and ran the pump one last time. I pumped 15 gallons at the press of a button. It’s exhilarating to think of our lives getting better, and relieving to feel the stress of months of apprehension vanish.

I filled the hole back up, and of course the kids showed up to play in the dirt.

On to the second phase of the project, which actually happened before: bringing the pipe in the house.

Years ago, when we ran the overflow disposal, I added another pipe in the trench, from the well to somewhere near the house. It was tricky to find it again, a vertical post in the ground helped a lot.

Connected to the pipe that’s been sitting in the ground, waiting patiently for 4 years.

I made another hole in the house and ran the pipe through it. 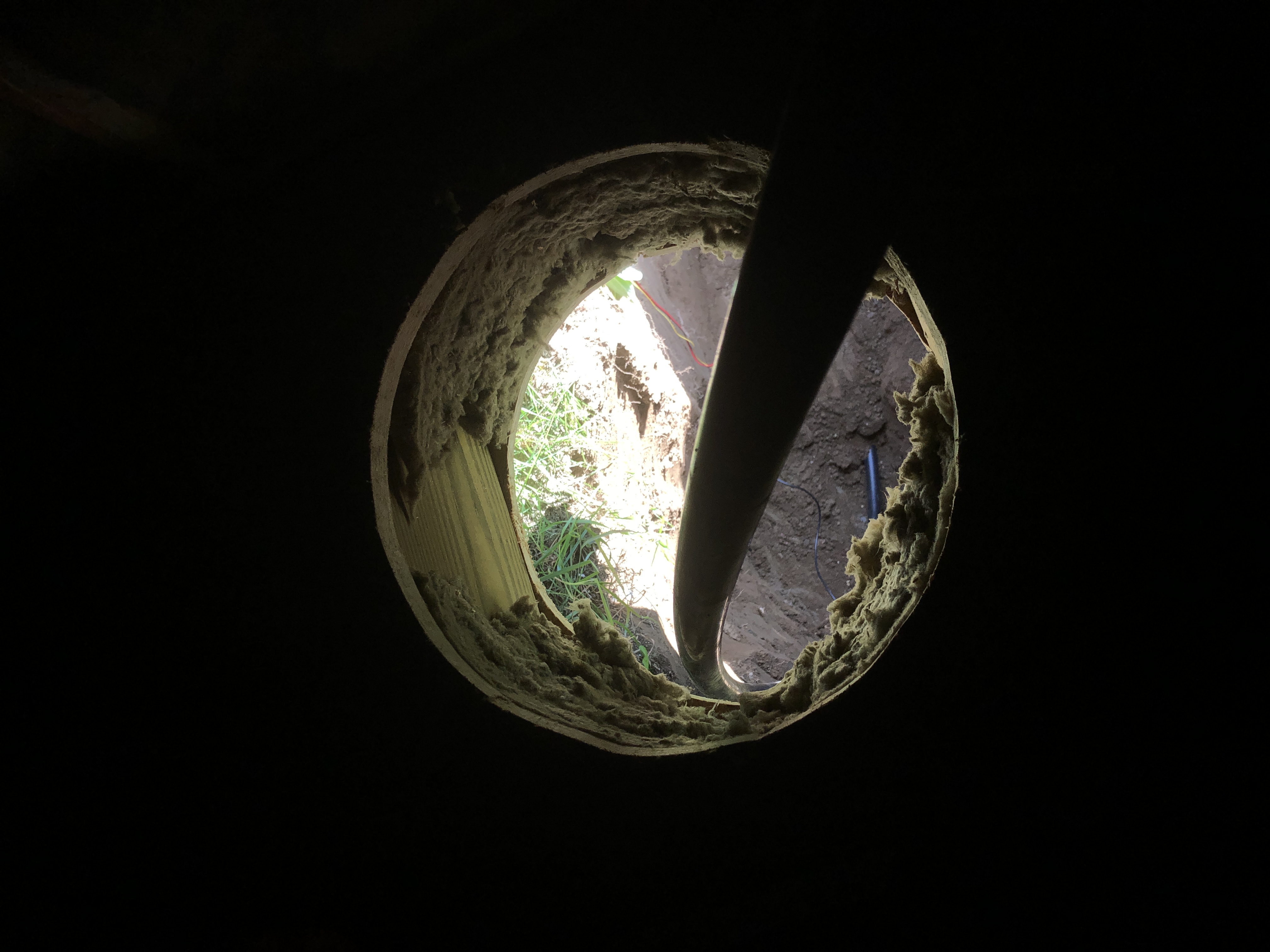 I attached 3 temperature probes on the pipe at different levels to have the ability to keep an eye on potential freezing. If I learn that we don’t get anywhere near freezing on the super cold stretches, I won’t ever have to worry about it. Otherwise, I’ll be able to flush the water back into the well, maybe even automatically so.

Then it’s one layer of insulation & vapor barrier after the next.

Finally, I used a culvert going 5′ in the ground to not only insulate, but provide a rigid conduit inside the house. I’ll be able to further insulate it if needs be, there is plenty of space left in it.

That’s all 🙂 we are now ready to bring water to various places in the house. It’ll be cake compared to this.