I missed swarms so far because the hives are far from the house and so I only see them every few days. This week end was a trial by fire when it comes to swarming.

Finally, the neighbors spotted a swarm. It landed on a hemlock branch 40′ high. I tried everything to get to the branch including a 32′ extension ladder to no avail. So we put swarm catching box nearby and I kept a very close eye on them hoping to catch them on their take off to their new chosen home. Except one hour they’re on the branch doing nothing unusual and the next, gone! All gone, except for a couple of trailing bees seeming as lost as I was; the whole thing just vanished. 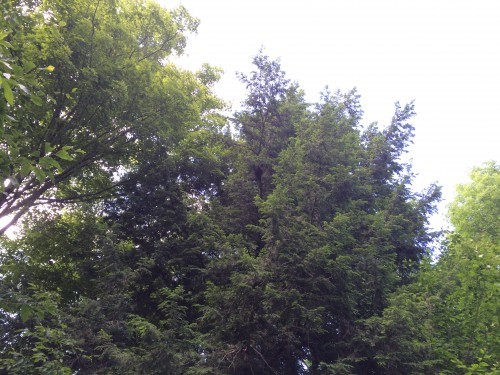 Well that was a waste of time and efforts. Especially considering they took almost a 24h to figure out where to go. The next morning, the neighbors tell me that the buzzing is back… That can’t be, whether the swarm is confused or I have a new one on my hands.

Can you see them? 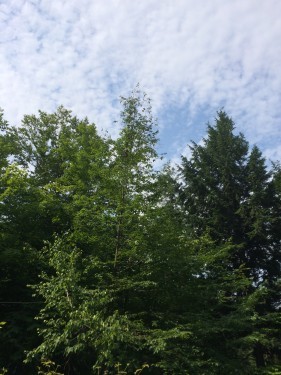 They are on a hop hornbeam this time, same height but an easy fell. And we proceed to do just that. We tie it to another tree to ease the sucker down with friction and it all works beautifully for the first 45 degrees but it all came crashing down for the remaining 45. The bees were not happy about that. They flew back to where the tree initially stood, I was afraid they would find another high branch nearby; but they eventually flew back to their branch of origin which was now very accessible to me.


I brought the swarm catching box to them and hand scooped them to the entrance little by little. It took a while with branches, leaves in the way and barely cooperative bees. Eventually a critical mass was reached and they all went in.

Definitely a foreign feeling to have your hand in there 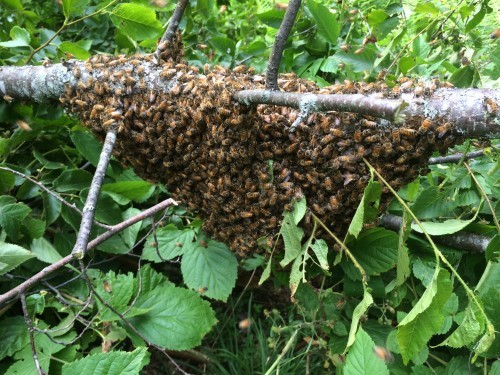 I inspected the other 2 hives to see what they were up to and heard a piping queen in both! Meaning these were indeed 2 different swarms.

Piping queen, tried to find her but time ran short as the other bees were starting to dislike my intrusion

Lesson learned: tall trees are a bad idea around hives. I’m going to have to find a better spot for them.

All of this wouldn’t have been possible without awesome people like Nina who lent me a swarm catching box and good advice, and Peter who is always ready for an adventure. I wouldn’t have been able to catch my first swarm without their help.

One Reply to “Crazy Swarmy Week-End”