We’ve been dealing with a brutal cold stretch which is most definitely testing our limits. The timing isn’t great, after a Summer of construction and an addition to the family in October, our wood reserves aren’t exactly plentyful.

A few days ago, I came to the realization that at the pace we are burning wood, we only had 10 days of reserves left. 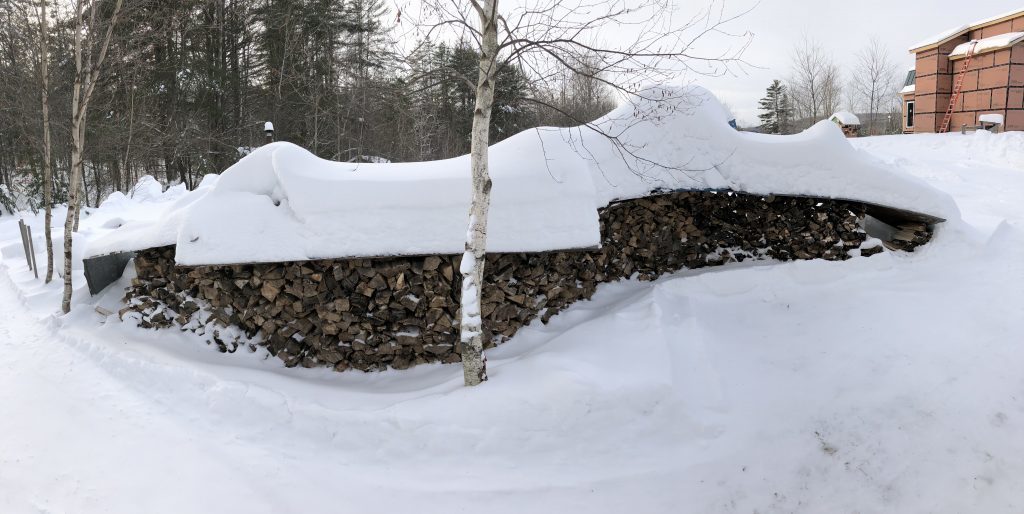 I thus decided we would not use this pile any more, keeping it available for the unexpected; we will instead produce wood as we burn it. I had 2 ash trees picked out since the Summer, they didn’t look too good, and they’re close to the house, they’d be perfect to finish the Winter. I didn’t realize they’d only help us start it. And so I went after them in the best temperatures this cold stretch had to offer, which were still quite low and made for some very tough work. I also grabbed a couple of dead poples while I was out there but they don’t burn as good as ash when green.

The morning routine now consists of splitting 2 sleds worth of wood, which covers 24 about hours. 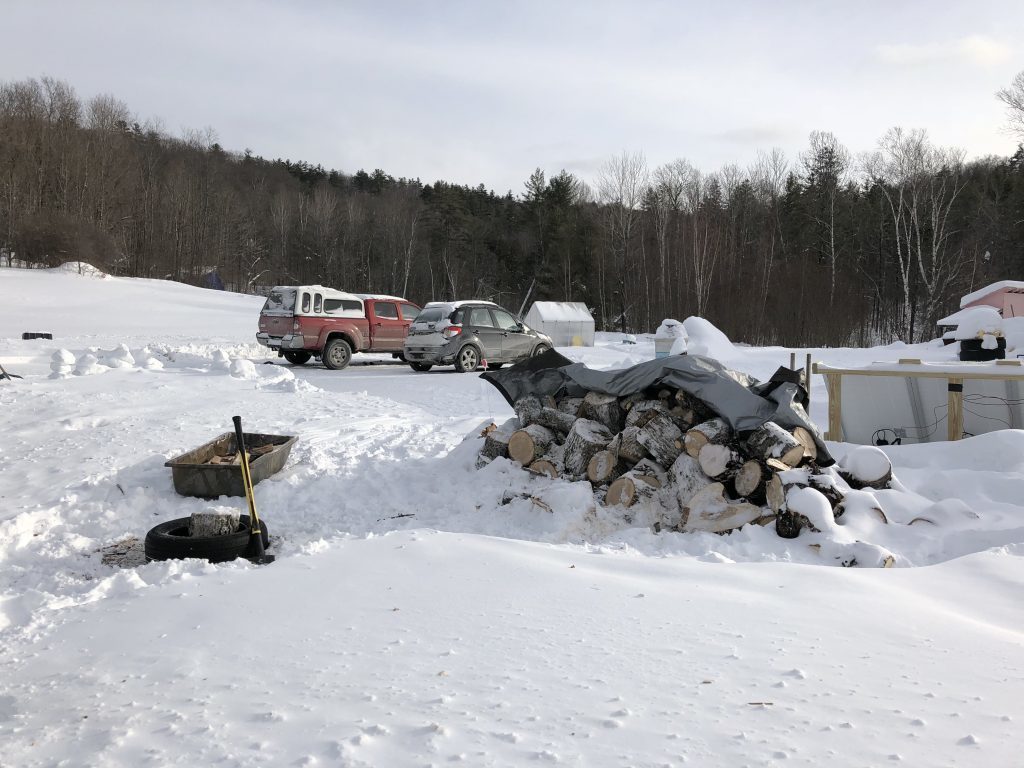 We folded back into the tiny house to make heating easier, it’s not too chaotic but we do miss the extra room.

The green house is incredible and turns a little bit of sunlight into non-freezing temperatures. 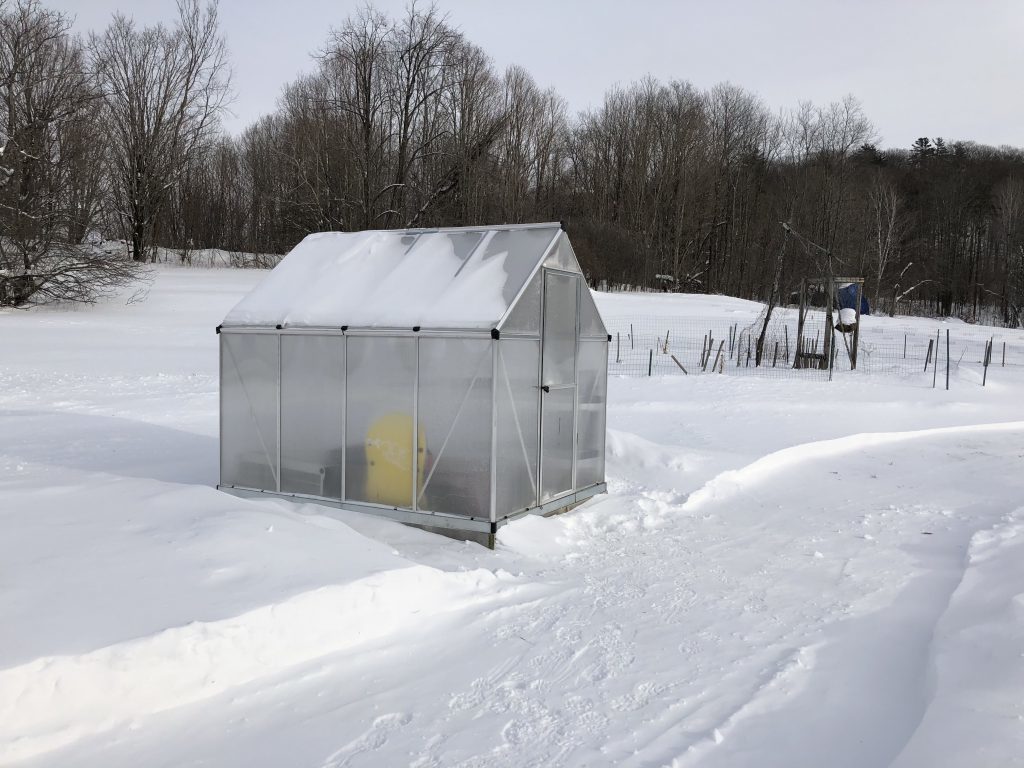 Building it around the well’s pitcher pump was an incredibly smart move. 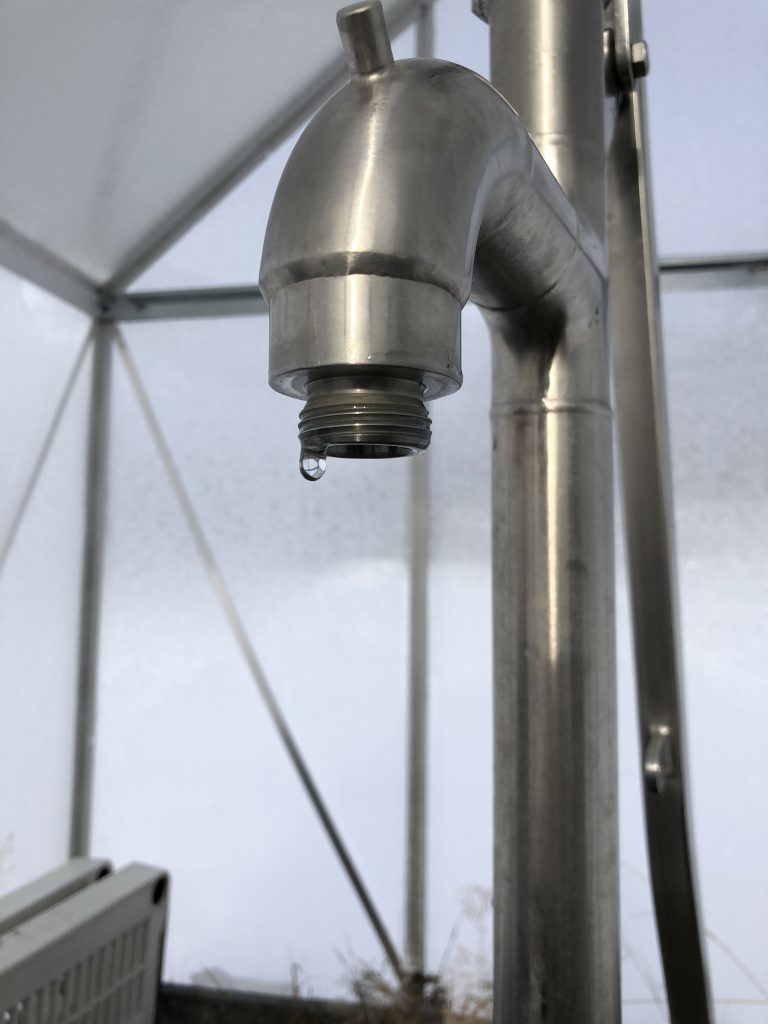 The snow and the wind also take jabs at us, really it’s been one thing after another. Equipment is reaching its limit. I suspected that the tractor’s battery would be dead at some point, and so I thought I’d jump it with the ATV. What I wasn’t counting on was that the wind would push the snow back on the paths I had plowed, making it very difficult to get close to the tractor to do so. I had the unexpected planned for, not the doubly unexpected. 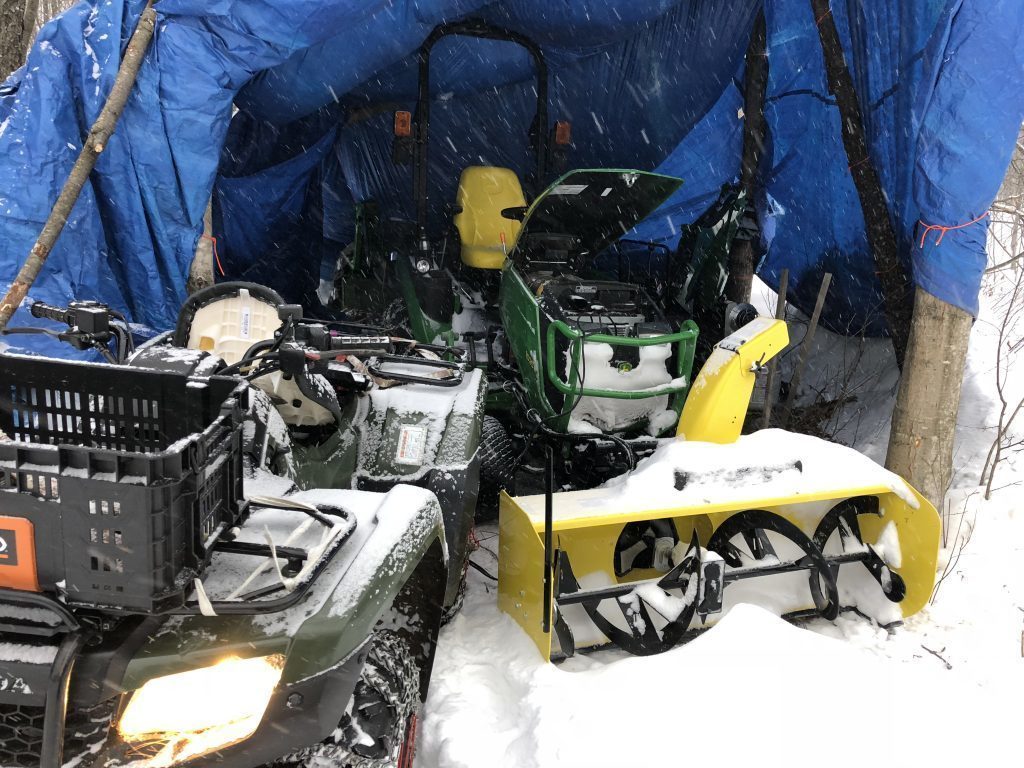 The cars also make funny noises and smells with such temperatures, anything mechanical is taking a beating. So is my body which does not get a single day without unforgiving chores outside.

The solar array batteries barely function as they are frozen, we’ll want them in a milder environment later on.

The porcupine is undeterred by the cold and still sets out every night for its routine. It picked a different tree this season and seems to like some of the paths I made. 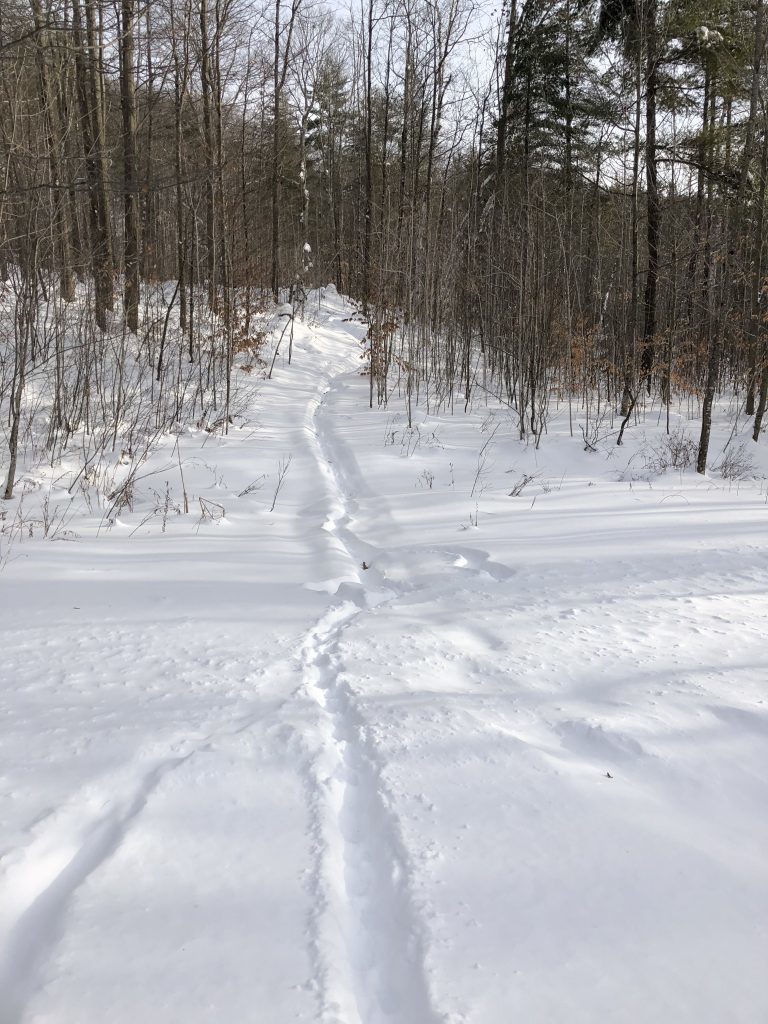 A friend gave us an aloe plant a while back, and I never paid much attention to it. Today though, we opened it up and rubbed some of the magical goo on our hands. It felt amazing and it’s nice to feel something other than biting cold, logs and hot stoves every once in a while. 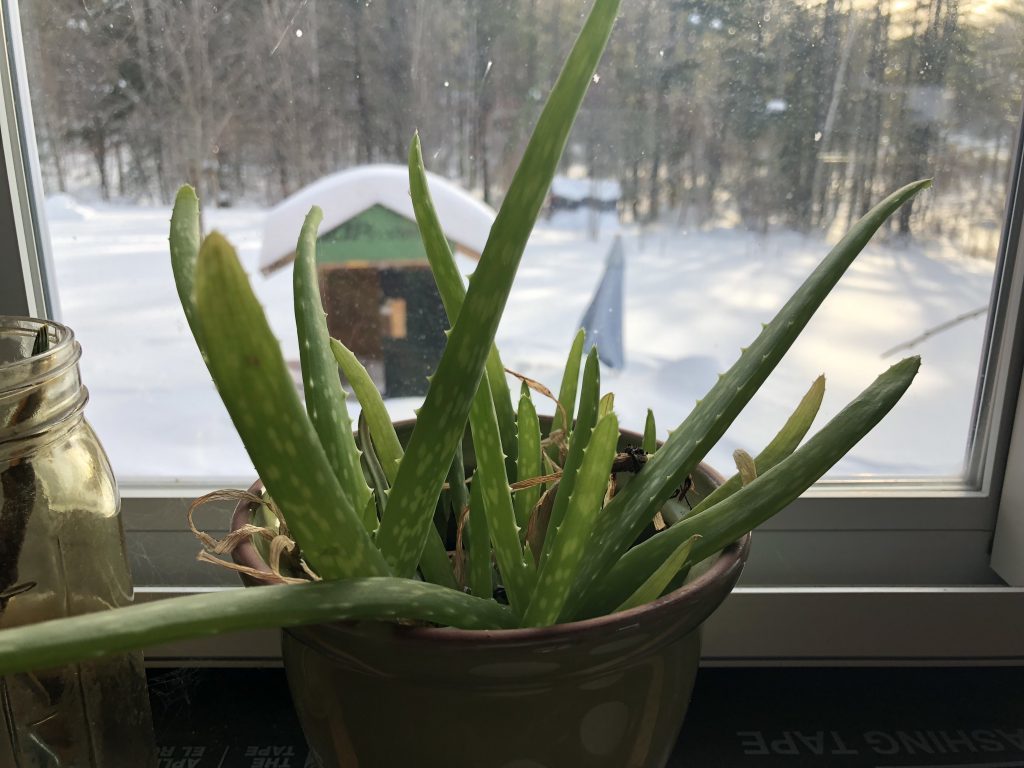 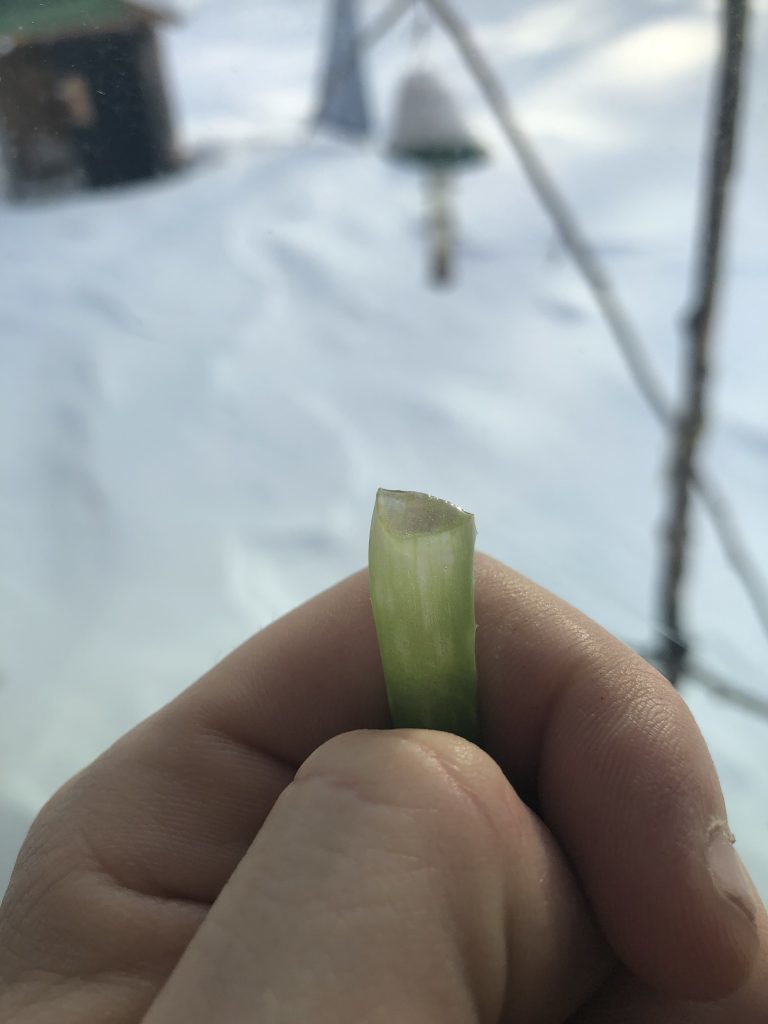 We reached the lowest temperature since we moved to the land on January 2nd. 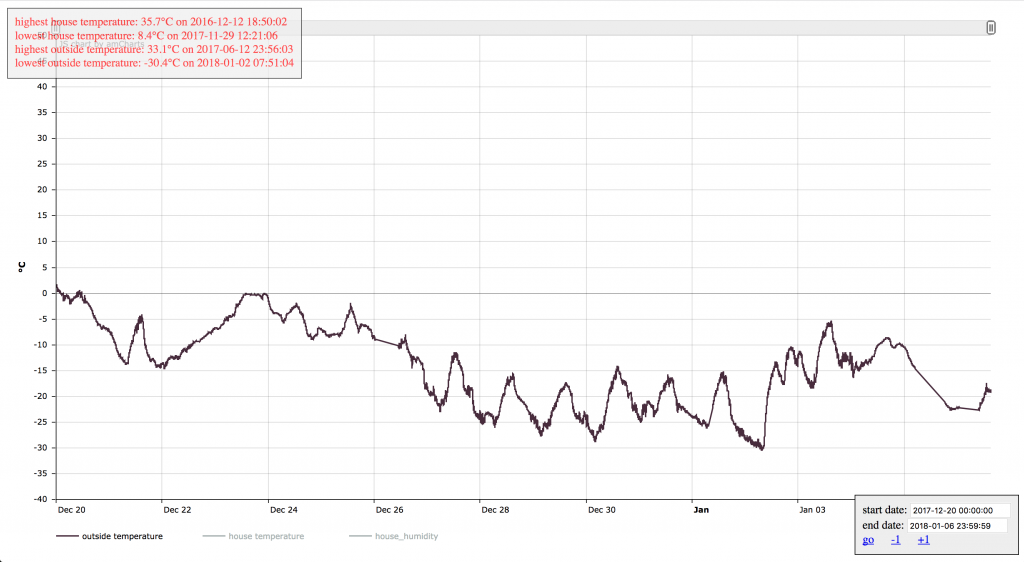 So here we are, one tough stretch reaching extremes and pushing all our limits. It’s ok though, I enjoy getting tested by the elements, this is what drives me outside during a storm. Still, we’ll be very relieved in a few days when we get to catch our breaths. We’ve learned a few good lessons along the way.